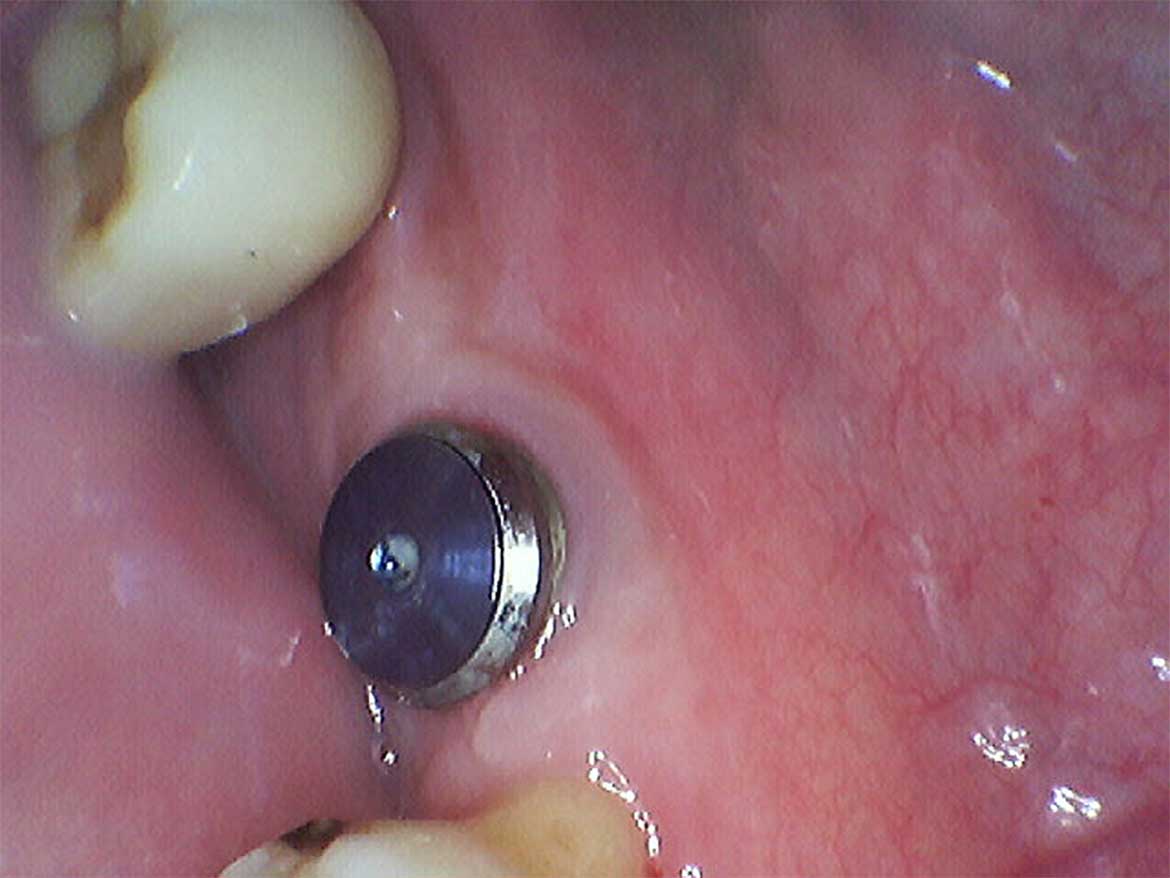 My patient had a tooth in his lower right side, the first molar, that was very mobile due to advanced gum disease with severe bone loss. The tooth was deemed hopeless in prognosis, so I recommended the patient have the tooth extracted. The patient has presented the different options with the would-be space left behind in detail: leaving the space empty, replacing it with a removable partial denture, fixing a three-unit-dental bridge, and placing a crown supporting by an implant. After all the fees, procedures and other questions were answered, the patient elected to have the tooth removed and replaced with an implant-supported crown.

After having a cone-beam computed tomography taken (CBCT) to determine the adequacy of bone volume and quality for an implant, treatment plans were made to place a tissue level Biohorizons implant immediately after the extraction using a surgical template to guide the placement of the implant.

The patient was instructed to take an antibiotic and rinse his mouth with an antiseptic for a few days before the surgery.

On the day of surgery, a local anesthetic was first administered, and when the numbing was profound enough, the tooth was atraumatically extracted. The inflamed tissues inside the socket were cleaned out carefully and meticulously. Immediately, an implant was placed inside the prepared socket. Due to severe bone loss from his advanced gum disease, ground bone particles from a human donor were grafted and packed around the implant. A special collagen membrane was placed over the bone graft to ensure that the patient’s bone cells migrated among the bone graft particles to form new natural solid bone around the implant.

After six months of healing, a resonance test, a device that gives out a measurement in number, was done to determine how well the implant had been embedded in the jaw bone. The measurement indicated a well-integrated implant with the bone; therefore, the implant was ready to support a crown. A Trois digital scanner was used to take an impression of the teeth and implant. The digital data were sent to a dental laboratory. A digital model was printed with the implant analogue embedded in it in the same way as the actual implant in the month.

A crown made with Zirconia material was made that fit onto the implant. The crown was then secured to the implant with a screw in the mouth that must be tightened with a torque wrench. 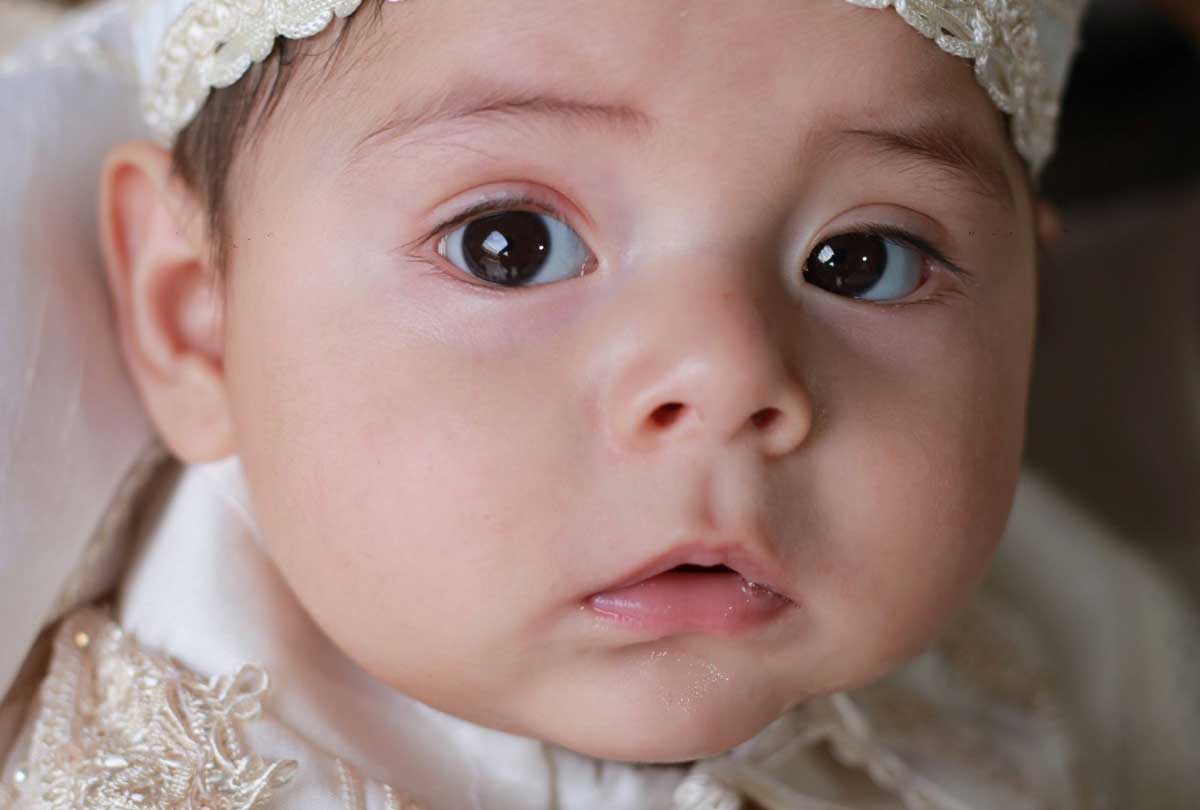 About lip-tie: In my last blog, I mentioned seven frena (also called frenula) in the mouth, found in the top, bottom, sides of the mouth, underneath the upper and lower lips, and below the tongue. The primary function of the frena is to keep the different structures together with flexible but restricted movements. The flexible and yet controlled movement of the organs (lips, cheeks, tongues etc.) allows proper food capturing, swallowing, speech, and mouth movement.

What is a lip tie?

A lip-tie occurs when a baby born with the frenulum attaching the lip, upper or lower lip, to the gums, is very short and tight. The lip-tie may make it difficult to move the lips. Lip ties are less common than a similar (sometimes co-occurring) condition: tongue tie. There is reason to believe that lip ties and tongue ties are genetic.

Lip tie has not been studied as much as tongue-tie, but treatments are similar.

Related symptoms in babies may include:

Related symptoms in mothers may include:

Babies with a severe condition may have trouble gaining weight. They may have an easier time drinking from a bottle, so you may need to supplement breastfeeding with formula or breast milk-fed from a bottle if that makes it easier for your baby to get nourishment. They will keep your baby on the right track, growth-wise, while you figure out if your child needs a lip tie revision.

Babies who have a severe lip or tongue-tie may have difficulty eating from a spoon or eating finger foods. Some pediatricians believe that an untreated lip tie can lead to a higher likelihood of tooth decay for toddlers.

How is it Treated?

It all depends on the severity of the tie: a small, string-like appearance on one end of the spectrum, a broad, fanlike band of connective tissue on the other. Babies with the severe condition can develop a callus on their upper lip.

The Kotlow classification system uses four grades to rate the frenulum based on appearance. With this system, the higher the grade, the higher the ‘severity’ of lip-tie, and the greater the likelihood of breastfeeding problems.

Level 1 and Level 2 lip ties are typically left alone and do not require revision. If there’s a tongue tie as well as a lip tie restricting your baby’s ability to feed, a pediatrician may advise you to “revise” or “release” them both, even if the lip tie is considered to be Level 1 or Level 2.

Level 3 or Level 4 lip ties may require a frenotomy procedure. However, most people equate frenotomy to frenectomy as they are two different procedures.

A frenotomy neatly severs the membrane connecting the lip to the gums. It can be performed using a laser or a sterilized surgical scissor. In comparison, a frenectomy involves total removal of the frena, including its attachment to the underlying bone, which requires more surgery than a simple frenotomy incision.

Besides frenotomy or frenectomy, the mother can try a therapy technique to loosen a lip tie and make it easier for babies to breastfeed. Sliding your finger along the top of your baby’s lip and practicing lessening the gap between the lip and gumline can gradually improve the mobility of your child’s lip.