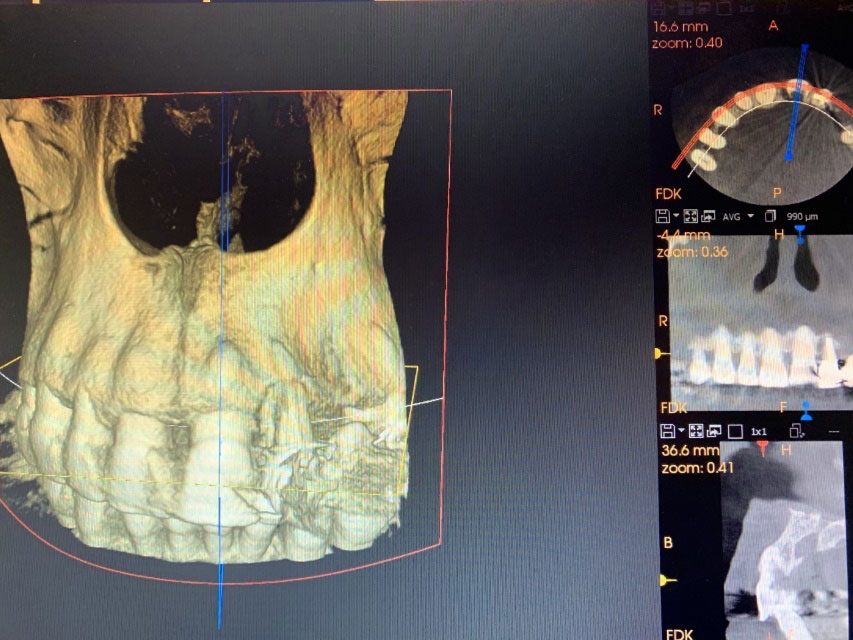 A few days ago, I was performing extraction of an upper front tooth and bone graft.
The patient has cardiovascular disease and is on a blood thinner. She also has a chronic mucogingival disease called Lichen Planus, which expresses red swollen inflamed gum tissues in her mouth.

After the initial examination, co-diagnosis of the conditions, treatment options, and discussions, the patient elected to extract the tooth and implant-supported crown to replace the tooth.

The case appeared to be an easy extraction and implant placement immediately right after into the socket. However, after a cone-beam tomography (CBCT) was taken on that area, the images show that there is not enough bone in the nasolabial area to accommodate an appropriate implant for the future crown. Besides, the tooth’s root was too close to the bone surface on the labial side that the bone would likely break apart during the extraction, leaving behind a large depression in the alveolar bone. Another discovery is the proximity to the nasopalatine canal, one of the vital organs that an implant should avoid touching.

Due to the above discoveries from the 3-D CBCT, the initial plan was to extract the upper front tooth and preserve the labial (buccal) bone covering the root as much as possible and the bone graft of the entire buccal area to promote bone formation for a future implant in 6 months.

A temporary, provisional tooth will replace the extracted tooth using the teeth beside for attachment.

Those were the plans.

Because of her medical conditions, I contacted her cardiologist for medical consultations and clearance for the proposed extraction and bond graft.
The patient was given oral antibiotics and an antiseptic mouth rinse before the procedure to minimize post-operative infection of the site.

Local anesthetics were given to the patient. The tooth was first cut with a diamond bur vertically from the top to the root, hoping to preserve a sliver of the tooth on the facial (labial, buccal) side to maintain the bone there. However, the bone was so thin that it broke off while removing the rest of the root, so there was no buccal wall for the socket, leaving a defect behind.

Vertical incisions were then made on both sides of the defect on the labial side. The gums were peeled off the defect and raised. A resorbable collagen membrane was trimmed to size and tucked underneath the raised gums (flap). Human feezed dried cortical and cancellous bone chips were mixed with bovine bone particles. After the bone chips and particles were adequately hydrated with sterilized saline solution, they were packed into the defect and underneath the membrane to fill up the defect and beef up the nasolabial area’s volume. The resorbable membrane was then curled over the socket’s cervical opening on the top to cover it. Another membrane made with polytetrafluorethylene (PTFE) was placed over the collagen membrane. The facial flap was sutured to approximate with the palate’s gums (the facial flap was made tension free before the suturing to make sure it covered the membranes’ full surface placidly with the suture stabilization.

A prefabricated temporary tooth was then tried to make sure it was sitting at the same position as the extracted tooth and was not pushing against the flap. Otherwise, the temporary tooth will affect the healing and attachment of the gums together. After some adjustments were made to ensure the false tooth would not pushing against the surgical site, the temporary tooth was then attached to the other teeth besides the extracted tooth using composite resin. Occlusion was checked and adjusted. The surfaces were polished smooth to reduce bacteria and plaque adhesion.

Post-operative instruction sheets were given and discussed with the patient in detail to make sure the healing will be non-eventful.
During the healing phase, the primary goals are for the gum tissues to completely heal over the membranes and fused with the other gum tissues together to disallow any invasion of pathogens into the surgical site. For the gum tissues to stay put and the gums’ epithelial cells to grow together, non-disturbance of the site for at least two weeks is essential. The second goal is to avoid infection taking place before the gums are healed. Systemic antibiotics and topical mouth rinses were prescribed and continued to be taken during the initial healing phase.

In about a week, the patient will come back for the suture removal.

I will continue to update the progress of this case in my future blogs. 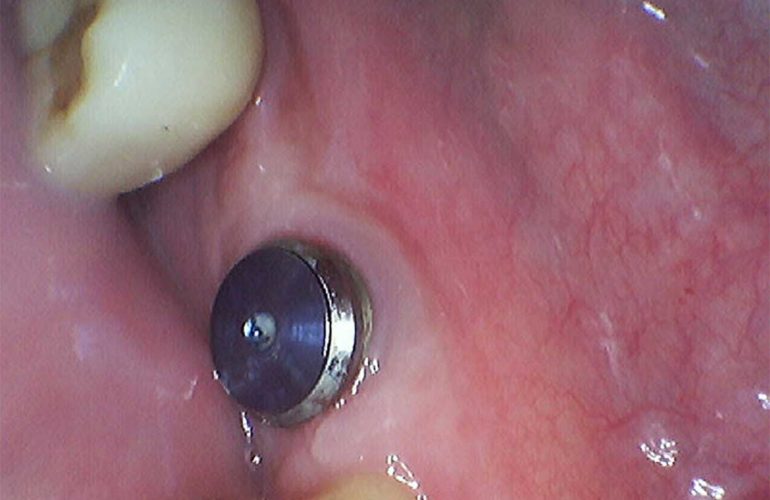 My patient had a tooth in his lower right side, the first molar, that was very mobile due to advanced gum disease with severe bone loss. The tooth was deemed… Read More
Blog

Affinity Dental Care - Mini Implants Where there is periodontitis (infection in the supporting gums and bone around the teeth), the bone disappears and gets smaller. When the teeth… Read More 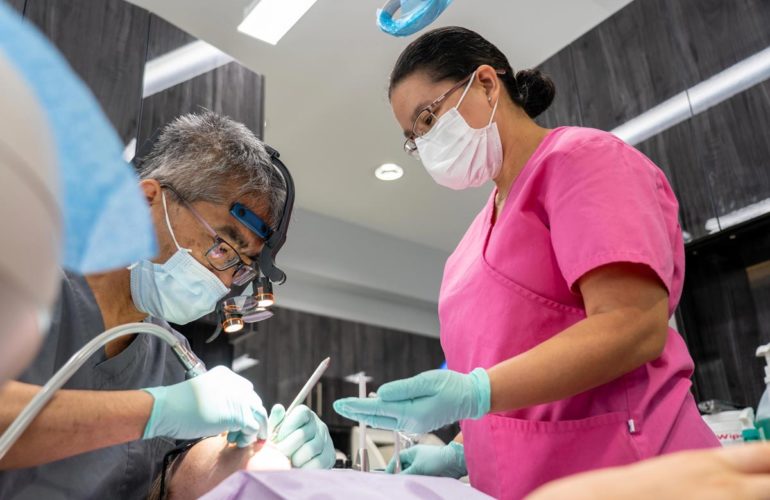